What’s going on in the world of royal jewels and royal research?

When I find out about auctions, exhibitions, new book releases, and more, I’ll drop them here just for you. If you’re lucky enough to visit one of the exhibitions, send me pictures! Or if you have more information to add to this page, drop me a line.

This auction is titled “Visions of Collecting: Royal and Aristocratic, An Important Private Collection.” Whose collection? We don’t know, but they had some beautiful and historically significant stuff. My favorite piece up for grabs is a painting of Princess Sophie, Electress of Hanover by Gerrit van Honthorst. She was the twelfth (twelfth!) child of Charles I’s sister, the exiled Queen of Bohemia. You can see another portrait of her in the UK’s Royal Collection, in which she’s also wearing a blue off-the-shoulder gown. It’s expected to sell for roughly $36,000 - $61,000. I can tell you right now, the buyer will not be me. I got my propane bill and my car insurance bill today. I’ll be lucky if I can buy a stick of gum. 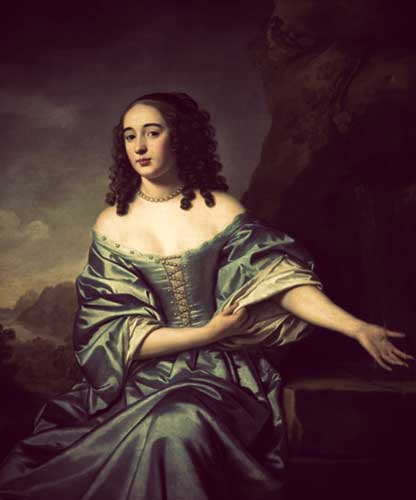 There are two other items I want to point out to you. You can bid on a collection of 8 trays that belonged to Queen Marie of Hanover - they’re painted with her logo. The estimated price is about $1,800 - $3,000, which means they’re expensive AF for some trays, but that royal provenance makes them tempting.

The second item I’m interested in is a five-piece Faberge silver tea and coffee service, circa 1908-1917. The teapot and the coffee pot both have an ivory handle, which I’m not crazy about (ethically or stylistically), but it’s a freakin’ Faberge tea and coffee set. I’m not gonna complain. Except when I have to shell out the expected $12,000 - $18,000 to pay for it.

Ever wanted to see the palace of Versailles...and then had a mild heart attack when you looked at airfare prices? Me too. Now we can get up close and personal with Versailles through our phones. I have to say, I’m really enjoying the Google Arts & Culture app these days. Now it’s even better because it can take me inside the place I think my personal heaven would most closely resemble: the palace of Versailles.

Here’s the cool thing...Google has also included a lot of content about the paintings of Versailles, science and technology at Versailles, the people who lived there, and more. I’m checking this out on a lunch break at work right now, and I can already tell half an hour IS NOT ENOUGH TIME. I need more Versailles in my life.

In the video below, you can see how Google worked with palace curators to create the VR tour of Versailles...and it’s enabled with subtitles so you don’t have to struggle with your high-school French (or maybe that's just me).

It’s finally here! I’ve missed this series SO MUCH. I’m a very introverted and admittedly self-centered person. When I watched this show, it made me want to be a better person. You see people confronting the hardest situations in all of life, and they do it with grace and quiet determination and an ever-ready wit for all those those formal dinner conversations. I would have been a colossal failure at being a lady, but this show makes me wish I could try.

Holy Mother of God, I forgot how much I love the sparring between the Dowager Countess and Lady Merton (Isobel Crawley).

This exhibition celebrates the changes Queen Victoria made to Buckingham Palace. Today, we think of the palace as part of the royal family’s public persona. All those famous balcony moments, right? The waves, the kisses, the totes-adorbs royal kiddos stealing the show...but it wasn’t always that way. Queen Victoria and her husband, Prince Albert, were the ones who took a ho-hum residence and turned it into a focal point of the way people see and interact with the sovereign. Kind of a big deal, right?

As part of the exhibition, you can see the dress Victoria wore to the Stuart Ball in 1851, where everyone dressed up in period costume from the reign of Charles II. You can also see a recreation of the Crimean Ball of 1856, staged using a hologram and other Hollywood special effects. I wish I could see this. The painting below, by Louis Haghe, shows the Buckingham Palace ballroom, newly remodeled in 1856, but if you visit, you’ll get to see the real thing! 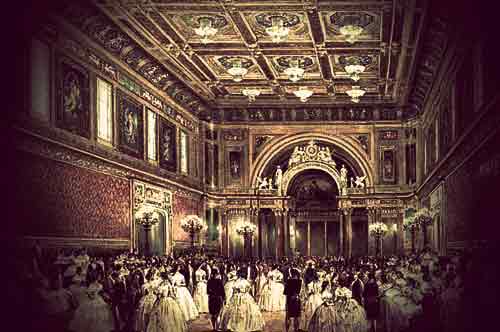 Holy crap, do I want to get my hands on this one. It’ll mean (a) ordering from a European vendor because Amazon.com is a big goose egg for this one, and (b) doing my scan-and-translate OCR routine, which takes forever but is undoubtedly faster than, say, learning Norwegian.

Here’s a glimpse of Märtha: 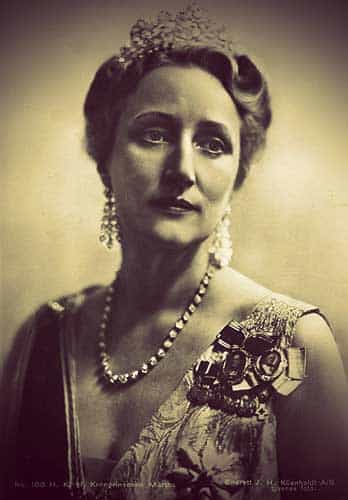 Why am I willing to go to such lengths to get a book about Märtha? Because I stumbled across the story of her dramatic flight from Norway ahead of the Nazi invasion, which intrigued me. And then I stumbled on the Gore Vidal reference to her as FDR’s last love, which really intrigued me. Is it true? Well, until I read Mr. Isaksen’s book, I won’t know.

On his blog, he posted several links to European vendors who sell the book. That’s where the link below will take you. See you on the flip side.

Where to Get It

See the silver chamblet silk that comes from a dress that may have belonged to Elizabeth I. Experts believe Elizabeth gave the original silk dress to the parish church at Bacton, in memory of her retired Chief Gentlewoman of the Bedchamber, Blanche Parry. The fabric was then repurposed as an altar cloth. 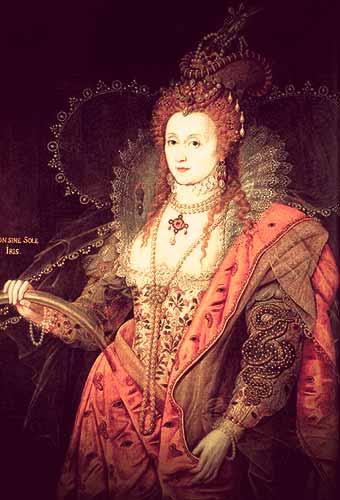 Now, that fabric is coming to Hampton Court, where it will be displayed next to The Rainbow Portrait. The fabric looks very similar to what’s used in the bodice of Elizabeth’s dress in that painting. Is it the same? No one knows for sure, but anything is possible. Don’t be fooled by headlines that call this Elizabeth’s last surviving dress, however - it’s just the fabric, as the dress was disassembled long ago. If you’re lucky enough to be visiting Hampton Court, your admission ticket gets you into this exhibition, too.

We’ve seen a few auctions with Savoy family items in the past couple years. This one includes art, manuscripts, linen tablecloths, sculptures, antiquities, and two cars from the family collection. Here are some of my favorite items up for grabs: 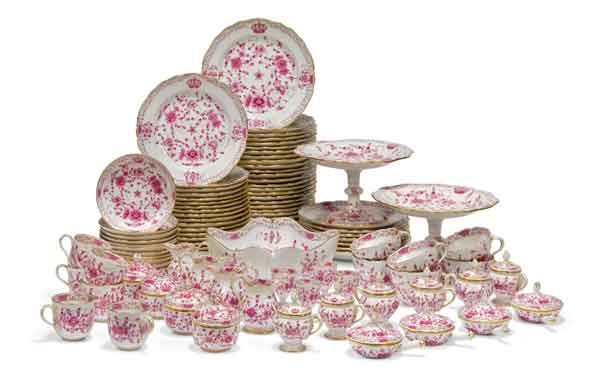 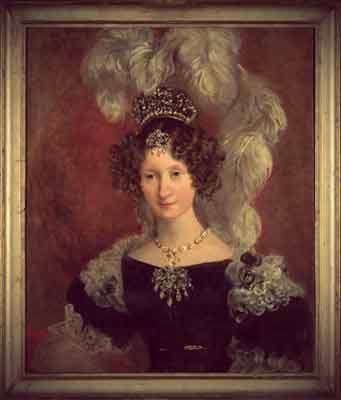 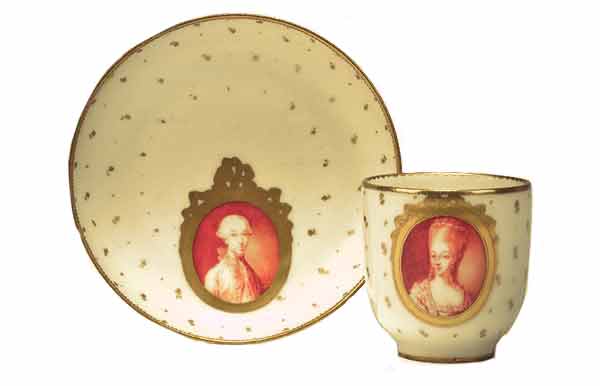 I can’t wait to read Lady In Waiting: My Extraordinary Life in the Shadow of the Crown by Anne Glenconner. 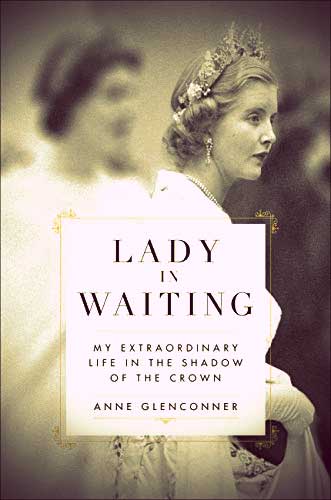 Anne is the oldest daughter of the Earl of Leicester. She grew up playing with Princess Elizabeth and Princess Margaret, and later became Margaret’s lady-in-waiting. She married Colin Tennant, Lord Glenconner - he’s the guy who bought Mustique, the island that became Princess Margaret’s favorite getaway spot. Oh, the stories she must have to tell...

This exhibition showcases the different ways history and the world at large have viewed Marie Antoinette: as a woman, wife, queen, mother, tragic historic figure, tastemaker, and more. Called ‘Marie-Antoinette: Metamorphoses of an Image,’ the exhibition includes 200 works (art, books, documents, etc.) highlighting 20 key events in her life. I love the fact that the exhibition is happening at the prison where she spent her final ten weeks, as opposed to, say, Versailles. And isn’t the artwork for the exhibition gorgeous? I love the vertical color stripe over Vigée-Lebrun’s famous portrait.

Dude, you guys, this is right up our alley. In this HBO miniseries, Helen Mirren plays Catherine the Great. Guess I’ll be turning on my HBO Now access for the first time since GoT ended...

What do you guys think of Helen Mirren as a Russian empress? She’s a brilliant actress and I’m pretty sure I’ll love this, but I’m having a visual holdup because in all her middle-aged portraits, Catherine’s features are so much rounder than Mirren’s. That full, sensuous, Rubenesque look is what I picture, and Helen Mirren’s features are much thinner and sharper. It’s stupid, I know. I’ll get over it.

I’m also curious as to which historical figures will be featured, and who will, for lack of time, be collapsed or condensed or just plain cut.

As of September 8, the IMDB page isn’t super-enlightening. I compared the cast list to the list of Catherine’s lovers. We have two who came before Potemkin (Vasilchikov and Zavadovsky), Potemkin, and then...three of her next lovers are missing (Rimsky-Korsakov, Lanskoy, Yermolov). The cast list picks up with Mamonov, one of her later lovers. We’re also missing her last lover, Platon Zubov - but his brother, Valerian, is in the cast list. I’m guessing those missing 3 have been skipped to make her relationship with Potemkin the focus. Also, probably to make it look like they were physically faithful to each other for longer than they were. I’m assuming they’re going to skip that whole Potemkin-nailed-three-of-his-six-nieces thing. Even for HBO, that’s sketchy territory.

The name says it all. This auction includes 8 things I want to tell you about - and 6 of them are tiaras. Here are some of my favorite items up for grabs: 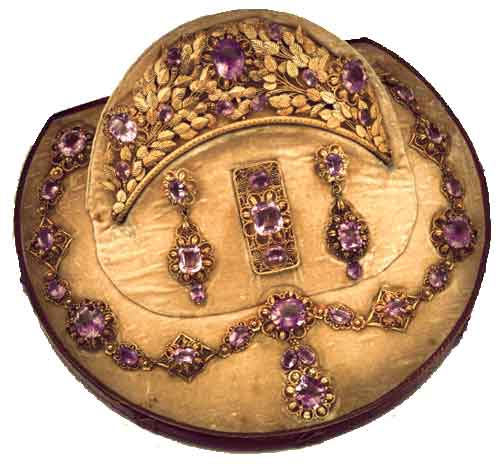 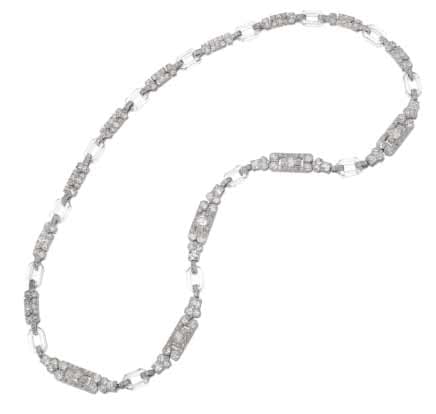 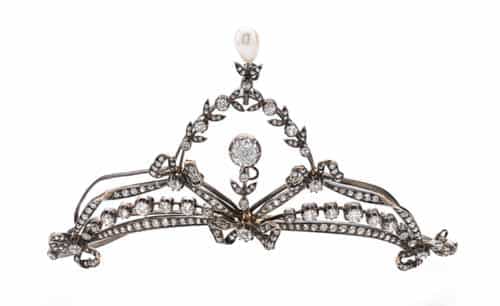 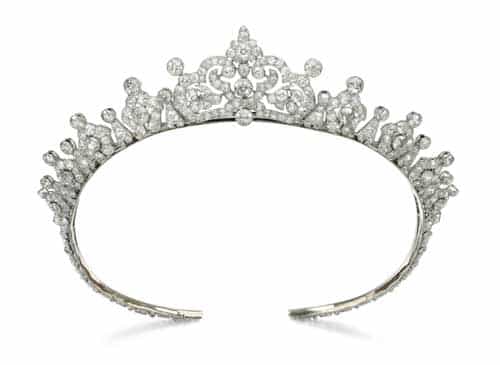 This season of The Crown has a stellar cast I’m super excited about: Olivia Colman as Elizabeth II, Tobias Menzies as Prince Philip, and Helena Bonham Carter as Princess Margaret. Tobias Menzies? I have been in love with that man since season one of Outlander. 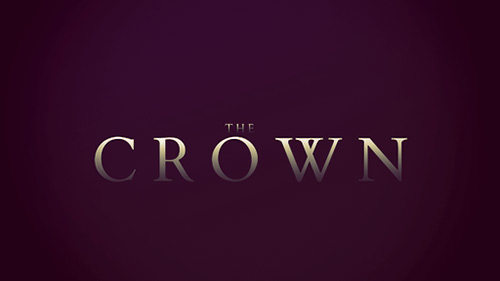 In this auction, we have four tiaras...and several pieces that either belonged to or have a connection to Empress Eugénie of France. Here we go, in no particular order. 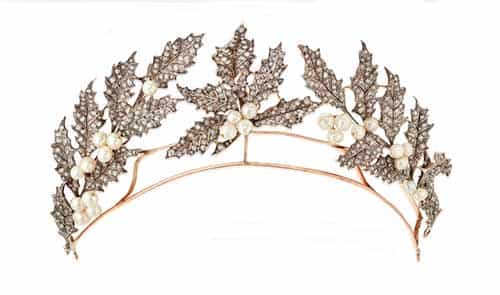 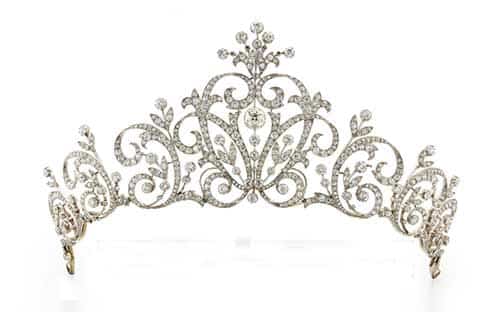 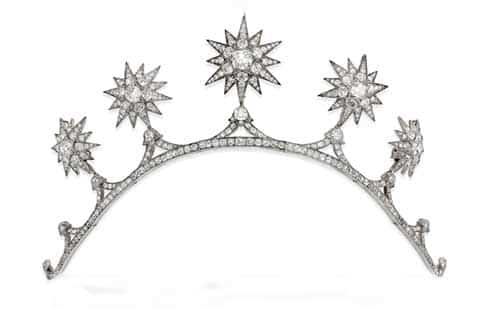 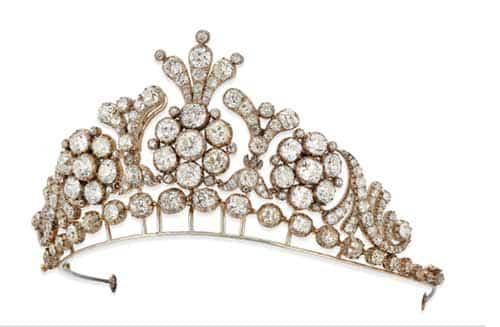 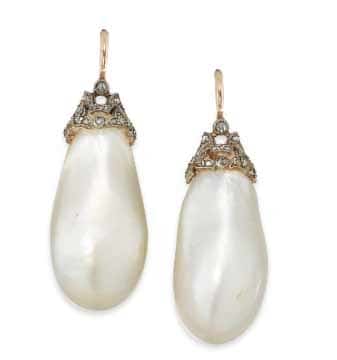 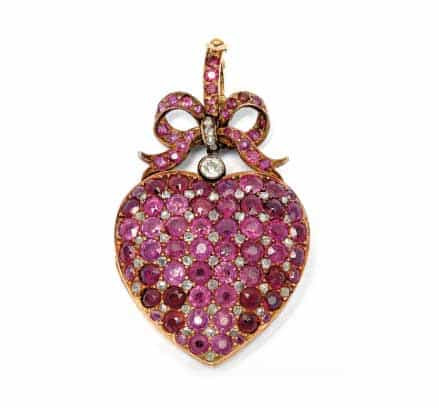 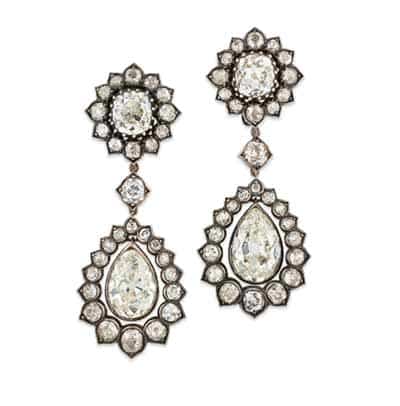 In this auction, we have a couple of pieces that belonged to Archduchess Marie Valerie, the youngest (and favorite) daughter of Empress Elisabeth of Austria. I drooled over this auction catalog for, like, an hour. 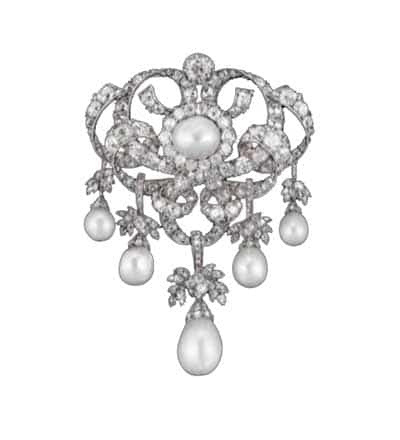 Just in time for Christmas! Scoop up that last-minute gift...for yourself. We have a few tiaras and an item that came from the Yusupov collection originally. 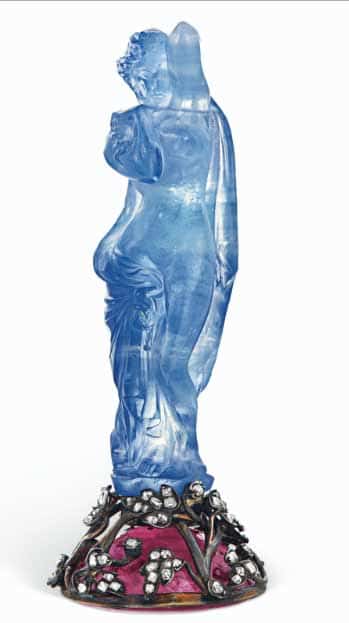 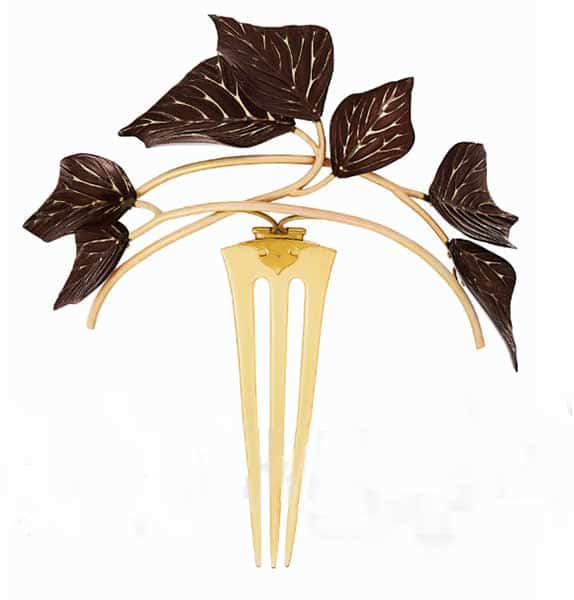