What’s going on in the world of royal jewels and royal research?

When I find out about auctions, exhibitions, new book releases, or anything interesting that relates to royal history, I’ll drop them here just for you. If you’re lucky enough to visit one of the exhibitions, send me pictures! Or if you have more information to add to this page, drop me a line.

I love the whole idea behind this exhibition. There’s only one requirement: be a strong woman who lived in Ludlow. Luckily for us, that includes Katherine of Aragon. She and her first husband, Prince Arthur, spent their honeymoon in Castle Lodge. The exhibition will include “a garment” of Katherine’s – as of right now, I can’t find anything more specific on what that might be. (I found this info via RoyalCentral.co.uk and Shropshire Star.)

Other women included are Mary Edwards, who computed astronomical tables for the British Nautical Almanac (wow!), glove maker Mary Bottomley, milliner Jane Poyner, and, erm, “lady of the night” Elizabeth Charmer. Isn’t that the best name, hooker or not? 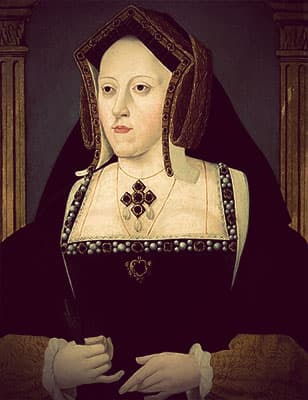 Want to see the world as King George III saw it? The Royal Collection Trust made 3,000+ of George’s military maps available on a new website to commemorate the 200th anniversary of his death.

George didn’t put this whole collection together himself. Part of it came from his uncle, the Duke of Cumberland. George also bought a collection that had belonged to a 17th century Italian patron, Cassiano dal Pozzo.

You can browse the website by major war, by date, or in a catch-all Miscellaneous group.

The website is really well done. You can zoom in, download, or share each map. There’s also a bunch of information to sift through for each one: creator, materials, scale, notes, people involved, physical properties, measurements, transcriptions, provenance, places, and references.

Check out this nifty map of the Battle of Abukir Bay, where Nelson sank 13 of Napoleon’s 17 ships. Ouch. 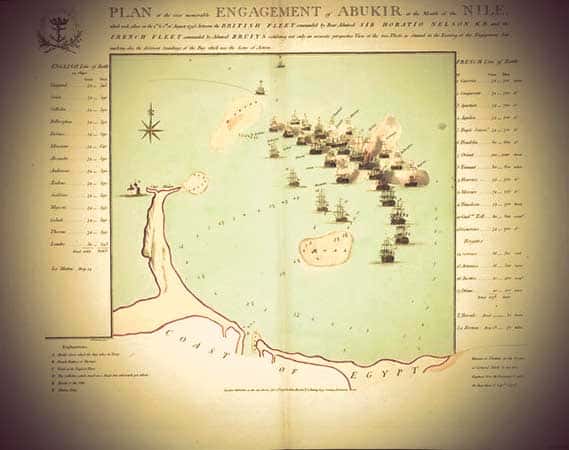 I’ve always wondered why Henry VIII’s wives didn’t have their own musical. I mean, if they can make a musical out of Abba songs, why can’t they make one out of one of the craziest real life dramas, like, ever?

Well, Toby Marlow and Lucy Moss did something about it.

Written in 2017, the musical got five Olivier Award noms in 2019 and was the second most-streamed musical album behind (you guessed it) Hamilton. In 2019, Six made it across the pond, opening in Chicago. Now it’s ready for the big time on Broadway.

The gist of the opening number? You know who we are, you know what the history books say. But there’s more to the story than what you’ve been told. My favorite line from the song “Ex-Wives” is, “I’m more than one word in a stupid rhyme.” Referring, of course, to the “divorced, beheaded, died, divorced, beheaded, survived” rhyme we all used to keep Henry’s wives straight in history class.

I listened to a few of the show’s songs on the website and definitely got a Spice Girls vibe. Just based on the playlist, it’s a very simplistic look at history – Anne Boleyn sings a song called “Don’t Lose Ur Head” and says “sorry not sorry for what I said” and “everybody chill…it’s totes God’s will.” And “Haus of Holbein” is a techno-polka Gaga-style ode to everybody’s favorite Tudor miniature painter.

I’d love to see this if I were in the area. Yes, it seems a bit cheesy but that’s kind of the point. I think the key is just going with it and having a good time. And if we’re lucky, a lot of excited musical-goers are going to become budding historians. I’m all for that.

Get Tickets or Stream Songs

This yearly fine art fair includes jewelry and - this year - a famous tiara.

If you’re in the neighborhood, you can go see the Anglesey tiara, worn by Marjorie Paget, the Marchioness of Anglesey, at King George VI’s coronation in 1937. 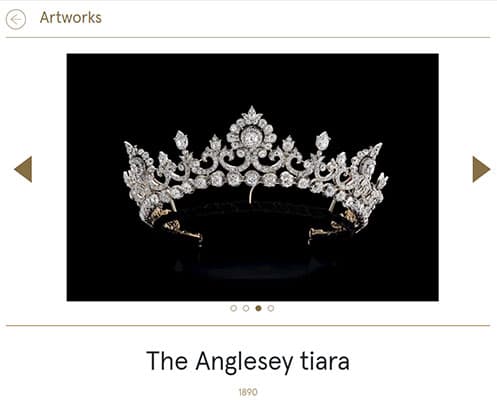 Who, you ask, was Marjorie Paget? She was born Lady Victoria Marjorie Manners, sister of the famous Lady Diana Manners and daughter of the Duke of Rutland. Her family is the one covered in the book The Secret Rooms, which I reviewed here.

The tiara dates back to 1890, when a different branch of the Paget family held the Anglesey title. I’ll do a little digging into this one and see if there’s anything interesting enough for a blog post. Stay tuned!

This auction didn’t catch my eye at first, until Christie’s emailed me with a couple selections that met my search criteria. Turns out, if you love oil paintings, you can scoop up two interesting pieces here. 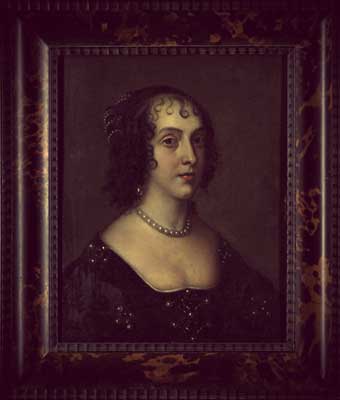 This painting belonged to Professor Michael Jaffe. It’s attributed to Theodore Roussel, one of Van Dyck’s pupils. Look at that interesting tortoiseshell frame! The portrait can be yours for the estimated sale price of $1,956 - $3,260. It’s pretty small - just 15.5 inches x 12.25 inches. Maybe put this above a small console table in your entry or hallway? 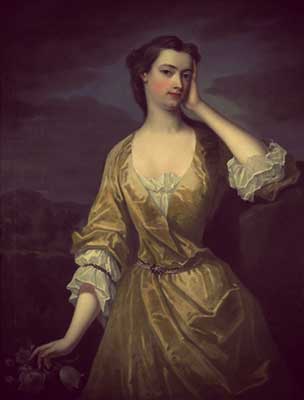 Look at this beautiful painting! Wow. I’d love to hang this in my formal dining room. Unfortunately, I don’t have the estimated sale prices of $7,824-$13,040. This is Elizabeth, the daughter of the Duke and Duchess of Marlborough. Yes, that’s the famous Sarah Churchill, Queen Anne’s famous favorite. Elizabeth married a dude named (unfortunately) Scroop Egerton, who became the first Duke of Bridgewater. The painter’s name is Charles Jervas. In a sick way, roughly ten grand seems like a small price to pay to own a painting of one of Sarah Churchill’s beautiful daughters. But that’s just me. I have a weird relationship with money.

When I first saw mention of this auction, I wasn’t interested - the jewelry for sale is from the late 20th century. If it was created when I was alive, it’s not gonna get my pulse racing.

Then I saw the accompanying exhibit and I said, “Oh, hello!” The exhibit’s full title is “Mellerio: Treasures from the Collection of France's Oldest Jeweler.” Seventeen of Mellerio’s historic pieces will be on display alongside the auction of their more modern pieces. Now you're talkin.’

Sotheby’s describes this ruby-and-cameo bracelet as “most likely sold to Marie Antoinette by Jean-Baptiste Mellerio (1765-1850) in 1780.” I know I’ve seen the receipt for this in one of my royal jewel books, so I’ll go dig that up and report back. 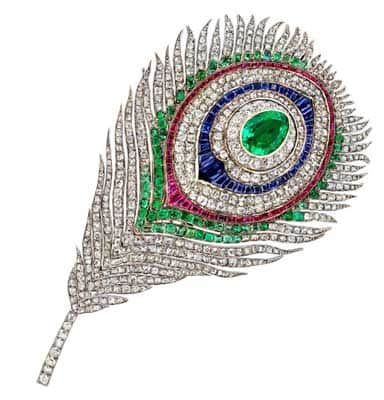 This piece is incredible, isn’t it? It’s described as “articulated and transformable,” but I’m not really sure what that means. I wish they’d shown a picture of it transformed alongside this one. Empress Eugénie bought this brooch in 1868, just two years before the Second Empire crumbled. If I owned this, I think I’d pin it on a hatband in place of an actual feather. How would you wear it?

Hulu Premiere: The Great
DATE: May 15

What is it with Catherine the Great? We’re getting spoiled! First, we had the Helen Mirren HBO miniseries last year. Now, we get a quirky alt-history take on Hulu with Elle Fanning as Catherine.

As you can tell by the trailer, this isn’t going to be historically accurate. Like, at all. But that’s part of the fun...and if you’re going to have someone as hot as Nicholas Hoult playing Peter, you really have to turn Peter from a pathetic asshole into...well, a less pathetic and less asshole-y asshole.

It was written and created by Tony McNamara, who also wrote The Favourite. He wasn’t looking to write another historical, he said. But Catherine’s story struck him as quite modern. At its heart, he says in this interview, is a single question. A woman marries the wrong man (or, to be more accurate, is married to him), and asks herself, “Well, should I kill him?”

We all know how it really turned out. But after watching this trailer, I’m super excited to see how it all shakes down in this version. Accuracy, schmacuracy. This looks imaginative and fun.